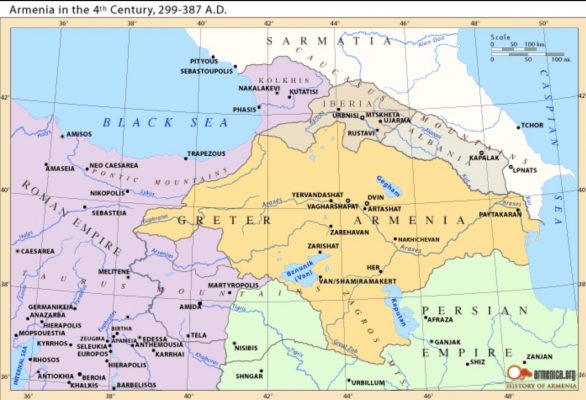 After the death of King Trtad III (Tiridates), the approximately one-century period extending between 331 and 428 A.D. was enormously characterized by an uncommon instability and indetermination, affecting both political and social life in Armenia. Continuous plots, intrigues, murders between antagonists (local and foreign), and the struggle about the newly adopted Christian faith marked tragically the situation throughout the main homeland. Beginning by the Great Trtad III himself, – it was indeed during his reign the Christianism had been introduced solemnly in Armenia, 301 A.D. – was the victim of incomprehensiveness and favoritism among his ministers (nakharar). The aging monarch, once constrained to leave the power, retired in his favorite region of Yegeghyats, where the feudal and non-convinced Christian nobles tried to kill him the first time without success, then by instigation of his own chamberlain, who poisoned him cowardly.

King Trtad III and Gregory the Illuminator yet in life, the Roman Empire was divided in two parts, so called Western and Eastern. In West, Rome remained the capital of paganism, and in East, Byzantium was selected as the second capital, under the reign of Constantine, converted into Christianism. Consequently, the roman Christian emperor tried to extend his power over other Christian countries, to take them under his own protection. Trtad and Gregory visited Byzantium in order to congratulate Constantine and so to consolidate the position of Armenia against intruders. The treaty between Byzantium and Armenia disturbed the neighboring Persians, who then hardened their relations with our county, and tried to reinstall the pagan religion in Armenia.

Trtad being dead, his son Khosrov II succeeded to his father: 331-339. – He was patriotic and liked to be constructive. So there has been great prosperity everywhere, even if Shapur II of Persia intended seldom to conquer the country. The Armenian general Vatche Mimigonian, with his courageous soldiers repelled successfully the forces of Shapur. A rebellion was organized against Khosrov by the adversaries of Christianism, who killed the Patriarch Vertanes. But they were subdued soon by the king with the help of his general Vatche Mamigonian. Was also subdued the turbulent tribe of Mazkouts, who were cooperating with Shapur II against the Christian Armenia. Khosrov ordered to build a new city, Dvin, which in the future should have its importance in the Armenian History. He died in 339.

His son, Diran, who took the power after his father, was an irresolute man. His bad character and dissolute life caused the rupture between him and the religious authorities. Diran had ordered to hang the picture of the paganizing Julian the Apostate in the Armenian churches, which the Patriarch Houssig reproved vigorously. The violent Diran then ordered to kill the Patriarch by fustigation. He ordered also to exterminate many of the members of Resdouni and Manavazian ministerial families. Diran tried to be in good terms with King Shapur, but then he broke the relations with him. He was conducted by treason in Persia and blinded. Shapur remitted the power into the hands of the captive’s son, Arshag.

Arshag II reigned from 350 to 367 A.D. A well-tempered personality endeavored to reunify all the feudal families under a central government, and by this way to reconstruct the political and military power of Armenia. Aiming more success for his ideas, he ordered to build a new city, Arshagavan, where he gathered all the heteroclite people of politically persecuted and condemned refugees, with the hope they can support him. Nevertheless, the Armenian high ranked nobles considered this act as a threat for their authority and security. But with unified forces they made soon to attack Arshagavan and destroy it. Arshag retaliated severely, killing many of the rebels, among which were also the proper cousins of the king, Knel and Dirit. The Mamigonian family was designated by Arshag to take the responsibility of Armenia’s defense.

The most important event during Arshag’s reign, was the consecration of the Patriarch Nerses. The king himself chose the person that would be on the head of the Armenian Church. That person was a simple soldier in the Armenian army, Nerses the Parth. Tall and handsome, his long and beautiful curls were cut down before committee in tears. Once on the ecclesiastical throne, the new Patriarch, very intelligent, humble and affable personality, dedicated himself thoroughly for the well being of all. He has been simultaneously a reformer and a benefactor, who undertook to construct orphanages, schools and hospitals. King Arshag, whose father was perfidiously blinded by Shapur, being informed that the Persian king intended to kill him by every means, tried to consolidate his relations with the roman emperor. On this, the Persians attacked Armenia, and with the complicity of two Armenian ministers Merujan Arzrouni and Vahan Mamigonian, invaded our country, causing huge destructions, murders among women and children. Arshag, lately with his centralized forces, expelled the intruders out of the country. But Shapur didn’t yield. He sent in Armenia Alezan the Bahlav, who brought with him the package of sacred salt, sealed by the ring of the king. It meant all the sincerity of his intentions. Hesitating and cautious, then Arshag decided to go in Persia, where the malicious despot arrested him immediately and imprisoned in the Anhoush fortress, with heavy chains. From the ceiling of the dungeon stayed hanging the straw-stuffed skin of Vassak Mamigonian, Arshag’s most powerful army commander. Hopeless, the captive king committed suicide.

After his death, his son Bab was yet a child. So he remained under the protection of his mother Paranzem and other ministers, notorious for their loyalty to the throne. Bab was sent to Byzantium, at the roman court. Meanwhile and immense resistance was organized against Shapur with the help of the entire people. This time also Shapur, with the cooperation of two Armenian ministers, Gulag and Artavan, aimed to encircle Artakers fortress where all the Armenian forces had sheltered. The two ministers tried to convince the queen and the notabilities to surrender. But lately, being captivated by the bright speech of the queen, they changed their mind adjoining the national forces. They attacked the Persian army sleeping in the night around the fortress and massacred them. Then they sent Moushegh, son of Vassak Mamigonian to the roman court, for help and protection

Enraged by the shameful defeat, the stubborn Persian monarch surrounded the fortress again with huge force during one year. There was lack of food and arms for the encircled Armenians, who were obliged to surrender, giving by that the occasion for a general manslaughter and destruction in the county. The queen Paranzem died courageously crucified on a stake. But all this was not a desperate case for the Armenian people. They promptly reacted against the Persian atrocities. Under the command of army general Moushegh Mamigonian, they counter-attacked the enemy. They kept many prisoners, they killed them and sent them straw-stuffed to Shapur. Many pagan priests were burned alive on the pyre. In 370’s Tabriz was, Moushegh sequestrated the harem of the Persian king, but honorably let all the women to return home in Persia. Emotionally affected by the generosity of the Armenian commander in chief, Shapur engraved the picture of the Armenian hero Moushegh on a cup, and every time drinking his favorite wines, he repeated constantly: “Long life, Moushegh” …

In 367, the young Bab was in the age to occupy the throne of his father. His first idea has been to resume relations with Shapur, in order to secure peace for his country. In this purpose, the ransom was too high-priced: the heads of decapitated ministers of the queen, Paranzem, mother of Bab: Gulag and Artavan. So Bab began his reign with a first ignominious act, which enraged the people.

In 371, in a new war against the Persians, Moushegh Mamigonian led victoriously his soldiers, near the mountain Nebad. The Armenian apostate general Meroujan Arzrouni was captured and punished horribly, being crowned by a red-hot iron. The second apostate Vahan Mamigonian was stabbed dead by his son Samuel. Bab undertook unpopular measures, by minimizing the rights of the religious authority, by submitting the church to his own caprices. He also ordered the closure of all charitable institutions that were created by the Patriarch Nerses. Even so despotic, Bab liked to pay visit among his people, in order to recognize personally the needs of everybody. He tried to expel the roman armies out of Armenia, and so was accused by the antagonist ministers near the roman emperor. Treacherously invited to a banquet by the roman commander Trajanus, he has been assassinated, stabbed on his back.

His cousin Varaztad, succeeded over the throne. An athletically complexioned person, nevertheless Varaztad was so credulous and ingenuous, that when the prince Pad Saharouni accused the brave Moushegh of complicity in the death of king Bab, Varaztad ordered immediately his execution. Varaztad’s reign commander of the Armenian army, Manuel, son of the executed Moushegh Mamigonian, a man of exceptional competence, reorganized the social life in Armenia, where prosperity and cultural institutions flourished intensely. He ordered the reopening of all the institutions closed by king Bab, and abolished all the anticlerical dispositions and rules. He led victorious combats against the Persians, and secured Armenia from further invasions. Then he asked the protection of Theodosius, emperor of Byzantium. In peaceful time, Manuel attended the marriages of two royal princes, Arshag and Vagarshag. The first was crowned as king of the eastern part of Armenia, and the second, as king of the western part. Glorious and victorious every time and everywhere, Manuel ended his life peacefully, in his bed. Before dying, he spoke, bitterly weeping, to all the people gathered around his death bed, and showing his body full of cicatrix, he said. “I am unhappy; I would like to die on a battlefield.” Then, one of the two designated kings being dead, Arshag, called Arshag II, reigned alone over Armenia. But soon he was destituted by the persophil Khosrov IV (a member of the Arshagouni dynasty). The new king thought to renew the ties with the Byzantine emperor. By this, he was accused by his own ministers before the Persian king Vram, who ordered his imprisonment in the Anhoush fortress. He died in 415.

In the order of succession, then came Vramshabouh (382-414), an instructed and peaceful man. During his reign, the clergyman Mesrob Mashdotz invented the Armenian alphabet, in 405 A.D. The Bible was translated in Armenian, so that the people could understand it easily, instead of Greek or the Assyrian languages. The translation had been made under the revision of the Patriarch or catholicos Sahak, who ordered a widely propagation of the Bible throughout Armenia, by competent persons. It was a perfect and carefully executed translation, so that it has been considered as a linguistic treasure. It was called “the queen of translations”.

After the death of Vramshabouh, a transition period was created with the reign of a propersian personality, named Shapur (416-420), and the government of a Persian exarch (420-423). The last and unfortunate Arshagouni king was Ardashes III (423-428). He was a weak-minded man, who never knew to reign conveniently over the country. Without popularity, he was accused near the Patriarch Sahag, whom the ministers asked to call a Persian governor (Marzban) and destitute him. The Catholicos exhorted them to be tolerant, explaining that a national weak sheep is preferable to a foreign, healthy, but ferocious beast. Then the ministers accused both Catholicos Sahag and king Ardashes III before the Persian king Vram, who called them to Persia, and there they were destituted…so ended the misfortunate Arshagouni dynasty…