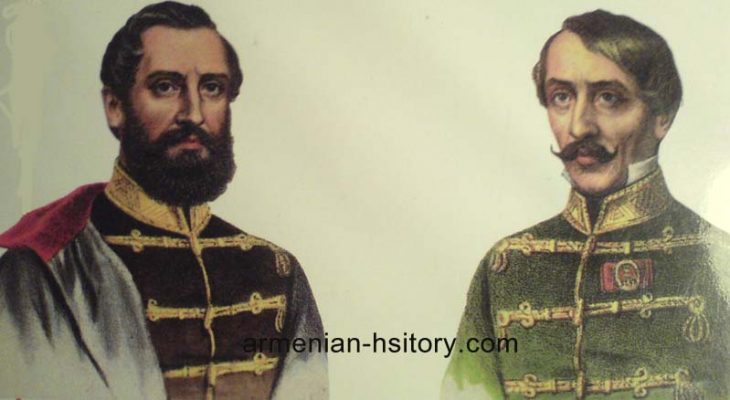 THE ARMENIAN HEROES OF THE WAR OF INDEPENDENCE IN 1848-49

Two of the thirteen military leaders of the Hungarian War of Independence of 1848 who suffered martyrdom on 6 October, 1849, Erno Kiss and Vilson Lazar were of Armenian nationality.

It wasn’t well known, that in 1848-49 how the Hungarian Armenians assisted the Hungarian nation’s fight almost beyond their ability.

The representatives of the almost entirely Armenian populated Transylvanian cities at that time, Szamosujvar and Erzsebetvaros, how enthusiastically advocated in favour of the unification of Hungary and Transylvania on the Diet of Transylvania in 1848. Armenians welcomed the liberating Honveds of General Bem first at the end of December, 1848 and again in March, with a feeling of great joy and tables laid with food. But soon the Emperial forces defeated them and many Armenians died.

The Hungarian Armenian  population lived not only in these two cities. According to the contemporary statistics in 1848 the Hungarian (2000) and Transilvanian (10,000) Armenian population consisted of up to 12,000 inhabitants.

The Hungarian Armenians were mostly the descendants of the Armenians who had settled down in Transylvania in 1672. The reasons for their appearance in Hungary and being dispersed throughout the country can be traced back to their professions. Being mostly merchants and craftsmen, they continuously moved to different regions of Hungary and Transilvania from the 18th century.

During 18th century many Armenian families got financial and political power.

There were about 70 Hungarian Armenian officers fighting under the national flag in 1848-49.

Altogether this might not seem to be a big number compared to approximately 11-12,000 Honved officers of the war. On the other hand, if we note, that these 70 officers cam from a total Armenian population of only 12,000. Beside Armenian officers there were also many Armenian soldiers.