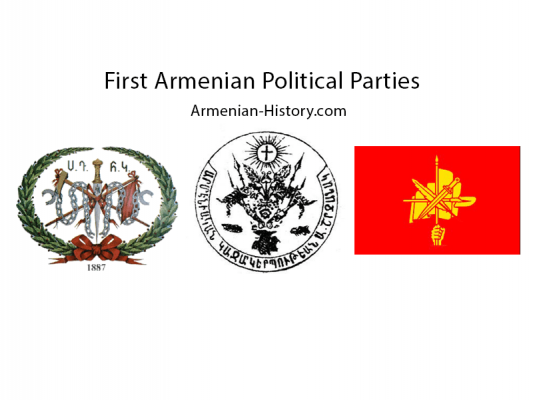 The first recognizable Armenian political party—with a platform, a central body, and an official publication—was the Armenakan party, founded in Van in the autumn of 1885. The guiding spirit behind its foundation was one Mkrtich Portukalian, the son of an enlightened Constantinople banker. Portukslian was a distinguished Armenian figure; typically, a tireless educator. During the late 1860s he had been a teacher in Tokat; he had travelled extensively in western Anatolia and Balkans in the mid—1870s, and had opened a school in Van in 1878. (Interestingly, it was open to Cristian and Muslim alike; besides Armenians, Assyrians, Kurds and Turks could all enroll.)

Factional strife among the Armenians—a recurring impediment— forced it to close after less than a year; but in 1881 he was able to open another, the Central School. But this time it was the authorities that objected, and after four years of work the school was closed in March 1885. Portukalian left Van, to spend the rest of his life exiled is Marseilles.

It was as a direct result of his activity that the Armenakan party was founded in 1885; from Marseilles he himself kept in touch with its leaders, and published a journal of political and social enlightenment, Armenia. One of Portukalian’s main points was that Armenians abroad should help those in their native land, both financially and by telling the world about their oppressed condition. Some expatriate Armenians took note; in December 1885 an Armenian Patriotic Society of Europe was founded; its headquarters were in Chesilton Road, Fulham—the private house of its leader, Garabed Hagopian. The society was to play an important part in disseminating news and arousing liberal opinion in Britain nine years late, when details of the Sasun Massacre began to leak out.

Despite the absence of their leading spirit, the Armenians of Van worked out their political principles. In great secrecy—in a burrow used for pressing grapes, furnished with nothing but a straw mat—Portukalian’s disciples met and hammered out their ideological platform. Their central aim, they decided, was to ‘win for the Armenians the right to rule over themselves, through revolution’.

The Armenakan concept of revolution was distinctly low-keyed, compared with that of succeeding organizations; terror, agitation and militant demonstrations were viewed with disfavour. The people were to be trained with arms, as guerrilla fighters, but essentially for defensive purposes, against the terrorism of the Ottoman yoke—since self-defence and guerrilla warfare do not by themselves free a nation? Hope was placed in the great powers. Armenakans were to ‘prepare the people for a general movement, especially when the external circumstances—the disposition of the foreign powers and neighbouring races—seem to favour the Armenian cause’.

It is arguable that this belief—that the great powers would intervene in the Ottoman Empire, and rescue the Armenian people and their revolutionary leaders from the clutches of Turikish misrule—was the greatest single error of the Armenian revolutionary parties throughout the period 1885-1908. With hindsight we can see that after 1881, when Tsar Alexander II with his unpredictable idealism was no more, and when Gladstone’s Liberalism had become tarnished by experience and failure, it was futile to hope that the solid, bourgeois powers of Europe would intervene in favour of a revolutionary uprising. But Armenians placed enormous faith in those twin creations of British diplomacy: the Cyprus Convention and article 61 of the Berlin treaty. They believed that under the terms of these two instruments the powers, and especially Britain, were bound to intervene in their affairs when Ottoman rule manifested its true face.

The Armenakans soon had cells outside Van, in other towns in the province, as well as in Trebizond and Constantinople. Beyond the Ottoman   Empire the party developed in small way in Russian Transcaucasia, in Persia and in the United States.

One of their exploits, although it failed, is of interest because of the testimony left behind by one of the participants. The incident was known as the ‘Salmas affair’. Three Armenakans, Garabed Kulaksizian, Ohannes Akribesian and Vartan Koloshian, originally from Van, now living in Salmas (Persia), where two of them were schoolteachers, disguised themselves as Kurds and, armed, attempted to cross secretly from Iran to Turkey, probably to recruit adherents to their cause. They were caught by zaptiyes just inside the Turkish border; a dust-up ensued; one was killed, another seriously injured and later murdered, and the third got away (28 May 1889).

A document was found on Kulaksizian headed ‘My last decision’, which, although not great literature, is remarkable for showing the mind of a man moving from passive acceptance to active challenge, and the painful readjustment necessary for a man belonging to a community which had eschewed violence for centuries.

Resistance to robbery often degenerated into cold-blooded killing of Kurds; legitimate liberation and self-defence became short-sighted aping of the opponent’s methods. Much of the enlightenment developed by Portukalian and his immediate successors was lost in sterile brutality. Agents of the government could not have thought up a more skilful scenario for delaying political development among the Kurds and Armenians, who, in revolt together, would have posed a serious threat to the empire. When Abdul Hamid armed the Kurds into Hamidiya Battalions in 1891 he obtained the same result as those Armenians who indulged in vengeance: Division of the two peoples from one another.

Against the background of a system of law which was the very denial of law, the first socialist and revolutionary Armenian party was founded. This society, whose doctrine was Marxist was founded in Geneva in 1887. Its members, all of whom were Russian Armenians, took the ideas of Portukalian and the Armenakans and gave them a clear imprint of Caucasian revolutionary thought. But the beam of their attention, along with that of other Russian Armenian groups, was directed upon Turkish Armenia, yerkir, the homeland.

The aims of this party (which had no name yet) were drafted in 1886. Broadly, they were for the achievement of socialism and the freedom of Turkish Armenia. A new, unified, socialist state was to be carved out of the existing imperial regimes; and this could only be brought about by revolution. The party would be a national one, in that it worked for the alleviation of the plight of the Armenian people, who were oppressed in eastern Turkey as a national group— that is, they suffered merely for being Armenians, not for being workers or peasants; but it would not be a nationalist party. The leaders saw the new, socialist Armenia as a beacon for the world socialist revolution.

The draft of the party’s principles contained a model of the Armenian state envisaged, and described how the revolution would occur; more extreme than the Armenakans, the party did not eschew agitation and terror. The instruments of the revolution were to be workers and peasants, whose activities were to be directed by a central committee.

1887 the party was actually formed, and the first issue of the party organ, Hchak, produced. Not until 1890 did the party adopt a name—the ‘Hunchakian Revolutionary Party’, or Hunchaks for short.

Leader of the Hunchaks was the young Avetis Nazarbekian (or Nazarbek; b.1866), a dedicated revolutionary and propagandist, but a man who seems to have enjoyed to excess the acclaim he received abroad for being a revolutionary. According to David Garnett, who met him and his future wife Maro when they were guests of Garnett’s mother Constance, he was ‘dark, slender, very handsome in an oriental style, and played the violin’. In the early and mid-1890s he was frequently in European capitals, especially London; and in 1894 the Turkish government complained to Britain that she was harbouring a man, who was a danger to the Ottoman state, and gave his address as 23 The Parade, Uxbridge Road, Action.

The Hunchaks soon had agents in Ottoman Turkey, Europe and America, and in the Russian Caucasus. It was an international movement. Soon there emerged other organizations, which stuck much more closely to the only practical center for Armenian revolutionaries, the Caucasus, which, although ruled by the bureaucratic functionaries of the tsar, was nevertheless a place where Armenians could meet, collect funds and organize without too much secrecy.

The First native Caucasian-born organization of any real significance was the Young Armenia Society, founded in 1889 by Kristapor Mikayelian. It only lasted for a year, before developing into a greater and more comprehensive organization. Although Mikayelian held genuine political principles, the Young Armenian Society’s policy was crude. It largely consisted of making forays into ottoman territory in order to ‘punish’ the Kurds for their oppression and violence towards Armenians. An important word in the Society’s vocabulary was vrezh—revenge. The idea that Kurds too were victims, but less obvious ones, of the Ottoman system was not apparent. Moreover, the Society believed in foreign intervention; as Russia had intervened after the Bulgarian atrocities, so, it held, would one or more powers come to their aid. In this, its leaders failed to note the changed political circumstances of the late 1880s.

The oppression under which Ottoman Armenians lived, and the official manner in which it was sanctioned, were such as to make revolutionary terrorism an entirely natural consequence. The Ottoman system of law was a denial of law itself. It was symbolised at this time by the Kurdish brigand-chief Musa Bey, whose villainy and violence were so great that foreign representatives demanded his arrest. He was taken to the capital, and, after a trial that was a mockery of justice, set free. An outcry resulted in the European press, and the sultan thought it prudent to banish him to Arabia, whence he quietly returned to his former activities.

Nevertheless Armenians were no longer suffering passively. They were raiding Ottoman territory, and, politically more significantly, the Hunchaks defied the government both in Constantinople and in Erzerum, ‘the capital of Turkish Armenia’. Social relationships throughout the empire were shifting as a result. George Washburn, principal of Robert College, Constantinople, noted of the years 1890-2 that ‘the old friendly feeling between the Turks and Armenians, who had always been regarded with more favour than the other Christian nationalities, and who seemed to understand each other better, had given place to distrust and fear. And in the Caucasus, also in 1890, a new word entered the vocabulary of the Armenian revolutionary societies— Dashnaktsutiun, or federation.

The Federation of Armenian Revolutionaries (Hai Heghapokhakanneri Dashnaktsutiun) emerged from the need for an umbrella organization for all the groups. And initially they all belonged to it. Nazarbekian and Mikayelian planned jointly to edit Hunchak—the journal of the new Dashnaktsutiun—in Geneva. The main objective of the federation was to win freedom for Armenia by a people’s war.

Details, however, were no worked out; perhaps because there were too many people pulling in different directions. Indeed, by the summer of 1891 the Hunchaks had split from the Dashnaktsutiun, less because of ideological differences than personal ones; and the following year the Federation’s name was changed to Hai Heghapokhakan Dashnaktsutiun (Armenian Revolutionary Federation), the name it has today. Thereafter, Hunchaks and Dashnaks would almost always be rivals. Policy divergencies, in the early years, were often slight; but in succeeding years it became clear that the Hunchaks gave priority to socialism, while the Dashnaks, in general, pursued a more nationalist path.

There were also differences in the internal structure of the two on the issue of centralization. Both nevertheless believed that in the prevailing conditions armed struggle was essential, and were prepared to use terror and intimidation—which were, indeed, used all the time by both tsarist and Ottoman governments—in order to achieve their aims.