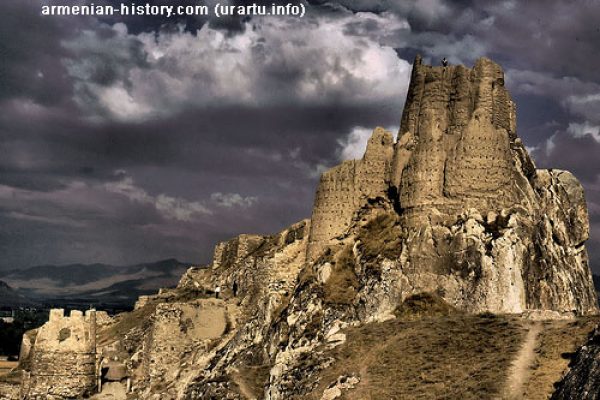 Van was established in first half of IX century B.C. In ancient period it was known as “Tushpa”. Armenians called that city “Van”. It came from the word Biayna (which was the central region of Urartian kingdom). In Armenian the meaning of Van is “a place of living”, “settlement”. Therefore other Armenian cities which were established later had in the end of their names the word “Van” (Ervand-a-van, Arshak-a-van, Zareh-a-van, Nakhch-a-van, Vane-van, etc).

Van also was known as Shamiramakert (kert in Armenian – build) or Shamiramashen (shen in Armenian also – build). It was the name of Assyrian Queen Shamiram. There is an epic legend about Armenian king (epic hero) Ara the Handsome and Shamiram.

Tushpa-Van was located on the left side of Lake Van, several kilometers far from the lake’s shore. The territory of the city had been inhabited from the ancient times.

Van’s castle (fortress, citadel) was built on the hilltop which was located in the center of the ancient city.

As there wasn’t enough water for drink and farming near the Van Urartian king Menua built a canal (80km long). Canal also known as Shamiram’s canal.

Van lost its importance after fall of the Urartian Kingdom (585 B.C.) when Median army captured the city.

New rising of the city began during the period of existence of Artashesyan (Araxiad) Kingdom.

Van started to raise during IX-XIII. Van especially bloomed when it became the capital of Vaspurakan (Armenian) Kingdom (during X-XI). But after XIII century Van’s growth stopped. During several ages Van several times was captured by invaders and at least became under the control of Ottoman Empire.

Van is one of the most ancient cities, which exists till our days. But after 1915-1918 (Armenian GENOCIDE and World War I), native population of the city, Armenians, were massacred (by young Turks) or emigrated to Eastern Armenia and Persia to save their lives.