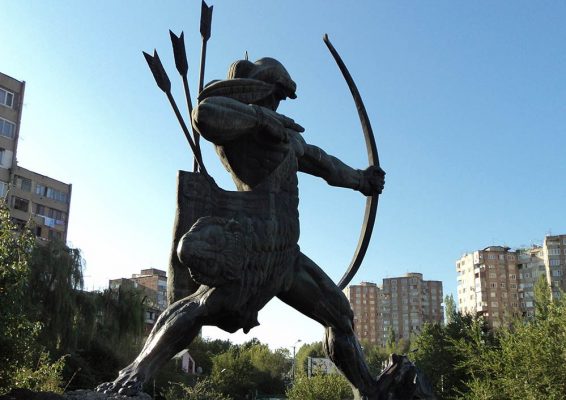 By God’s will terrible storm destroyed the Babylon Tower. After that every man and giant began to speak in a new language which could understand only he.

After a bloody war one of the giants Titanian Bel became the leader of all the others. He proclaimed himself as a king and god and tried to rule everywhere and everyone.

Hayk rise against Bel, and left Babylon with his clan, (near 300 men) servants and other foreigners who joint him. He went to the South. He settled in Ararat country.

Bell sent one of his sons to Hayk and demanded from him the recognition of his superiority. But Hayk declined Bel’s demand.

Enraged Bel collected a big army and came to Ararat. Hayk with his brave archers came across the Bel’s army. The bloody battle began. During the battle Hayk killed Bel with the arrow of his bow. After seeing the Babylonian king’s death, all his army run away. After this victory Hayk lived free in his new homeland. Ararat county, where had settled Hayk, later was called by his name Hayq (Haiq).

Aram was the great-grandson of Hayk, the ruler of Armavir. He dissatisfied that neighbors attack on Armavir. He collected 50.000 brave and strong Armenian archers, who were also good spearmen. Near his country borders Aram met Median General Nyuqar Mades with his big army. This Median General had already attacked and destroyed some Armenian settlements several times. Aram with his army attacked on Medians and defeated them. General Nyuqar Mades (Madis) was captured and was taken to Armavir where he was impaled.

In the same period Assyrian king Ninos (Ninus) wanted to avenge for Bel’s death. But after seeing the courage and numerous victories of Aram, he had to give Aram the rank of “the second after me (Ninos)”. During his reigning Aram defeated all enemies of Armenia. He gave his land to his son – Ara Gegecik (Ara the Handsome).

After Aram’s death Armenia became under the rule of his sun Ara the Handsome (Gegecik). The same period Assyria was ruled by Ninos, who gave Aram many presents and the same rank “the second after me (Ninos)” which was previously given to his father Aram. The wife of Ninos was Shamiram (Semiramis), who wanted to see and be with Ara the Handsome but was afraid of her husband.

When Ninos died, Shamiram sent her servants with many presents and proposed Aram to go to Ninveh (Ninve) and get married to her. Ara declined Shamiram’s proposal. Several delegations came to Ara with Shamiram’s demand, but Aram declined them all.

Shamiram angered on Aram. She collected a big army and came to Armenia. She didn’t want to kill Aram, but wanted to capture him and took Ninveh. Shamiram told his warriors not to kill him. The battle between Armenians and Assyrians began in the valley of Ara, which later was called by the name of Ara – Ayrarat. Armenian army was defeated and all Armenian warriors were killed. Ara the Handsome also was killed.

When Armenians heard about the death of their king they collected a new big army. Shamiram didn’t want to fight with them. When Armenian army came to kill her, she told them that Aralezs raise Ara the Handsome from the dead. She found a man which looked like Ara the Handsome and dressed him in Armenian king’s clothes. Armenian warriors saw that man and believed Shamiram. Later Shamiram built the Statues of a god who had “resuscitated” Ara the Handsome.

Ara the Handsome and Nvard (Ara’s wife) had a son Ara whose. Shamiram assigned him as a governor-general of Armenia. Arayan Ara was killed with Shamiram in the war. After Arayan Ara’s death his son Anushavan became the ruler of Armenia.

Torq Angegya was the son of Pasqam who was Hayk’s grandson. He was an ugly, high, strong man. For his plainness he was called Angegya (Անգեղյա).

Armenian Vagarshak king assigned Torq as a ruler of western part of Armenia.  Torq was the father of great Armenian lord’s house