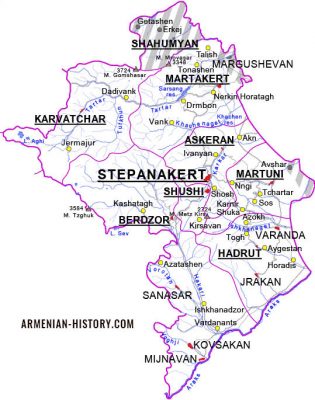 February 20, 1988 – Nagorno-Karabakh regional parliament decided to secede from Azerbaijan and rejoin Armenia. The first rally in support of Artsakh was staged in Yerevan.

February 27, 1988 – Armenian pogroms aimed at quelling Artsakh movement started in Sumgait, Azerbaijan, and raged from February 27 to 29. Hundreds of Armenians were slain (official report said 32), thousands wounded and 18000 driven from their homes.

November 21, 1988 – Armenian pogroms broke out in Kirovabad, the second biggest Armenians-dominated city after Baku, and raged until the end of the month.

January 18, 1990 – Armenians and Azerbaijanis started exchanging military strikes. A fierce battle near Yeraskh ended in Armenian militiamen’s sweeping victory over the Azerbaijani militants who attacked the village in an attempt to seize it.

February 27, 1990 – Armenian Kond, Tigran the Great, Armenian Self-determination Union and Jermuk militia groups along with local guerillas launched a pre-emptive attack from Vayk province’s village of Bardzruni. The attack was resulted in Azerbaijani Qyarmanchatakh village seizure in Nakhijevan and elimination of the five-time-greater foe’s forces.

May 27, 1990 – 27 Armenian militiamen and civilians were killed in a clash with soviet soldiers in Yerevan Railway Station and Nubarashen crossroad.

September 20, 1990 – Special Regiment was created. This regiment consisting of 26 platoons from Yerevan and provinces constituted the pivot of future Armenian regular army. The regiment consisted of 2300. Its toll was estimated to be 159.

May 4, 1991 – Government-affiliated Defense Committee was set up.

August 16, 1991 – Responding to soviet army outrages, women of Parandzem group in Artsakh’s village of Haterk (Martakert) captured 43 soldiers with their armament, including armored vehicles, and kept them hostage for five days.

September 21, 1998 – Armenia conducted an independence referendum. Over 99% of the country’s population cast their votes for independence.

December 4, 1991 – Armenian President Levon Ter-Petrosyan signed the law on government composition. Under this law, Defense Ministry was established along with other ministries.

January 6, 1992 – Nagorno-Karabakh Republic’s Supreme Council, taking into account the results of the independence referendum, declared the republic an independent state.

January 28, 1992 – Armenian Defense Ministry was established in the country on Supreme Council Chairman’s order. Vazgen Sargsyan was appointed to the post of defense minister. Later, the defense ministerial seat was handed over to Vazgen Manukyan, Vagharshak Harutyunyan and Serge Sargsyan.

February 26, 1992 – Nagorno-Karabakh troops launched an offensive against Khojalu, the second important strategic spot in Nagorno Karabakh after Shushi. The offensive ended in the city seizure.

March 29, 1992 – Azerbaijanis assaulted Stepanakert from Shushi, Ghaibalu and Janhasan but booted out after a fierce battle.

May 1992 – Air Defense units formation was completed. May’s third Sunday is marked as the Day of Air Defense Forces.

July 4, 1992 – Under strong pressure of Azerbaijani forces and mercenaries from Turkey, Armenians withdrew from Martakert. Later a part of Tartar was left as well.

August 5, 1992 – 106 civilians were killed in missile strike against Stepanakert.

October 8, 1992 – Tank division formation was over in Armenian army. October 8 was declared to be the Day of Tank Troops.

March 25, 1993 – Nagorno-Karabakh army launched an operation aimed at Kelbajar liberation (Karvachar) to open 2000-square km link between Nagorno Karabakh and Armenia. Hundreds of ancient buildings were saved. Dadivank built in IV to XIII centuries was among them.

April 1, 1993 – Kelbajar was liberated in a fierce counter offensive.

June 28, 1993 –Martakert taken by the foe right one year ago and six surrounding villages were liberated in two-day combats.

December 18, 1993 – 60 000 Azerbaijani troops with 1500 Afghan Mojaheds and other mercenaries launched a large-scale offensive to the full extent of Artsakh frontline. In two-month fierce battles (until March 1994) Armenians booted out the foe from the areas they assaulted.

January 7, 1994 – After three-day bloody combats, Azerbaijani troops and Afghan Mojaheds fighting together against Armenians managed to take back Horadiz, a remote southern spot of strategic significance though sustaining heavy losses.

May 12, 1994 – A cease-fire deal brokered by Russia and OSCE Minsk Group was signed by Armenian, Azerbaijani and Nagorno-Karabakh foreign ministers.