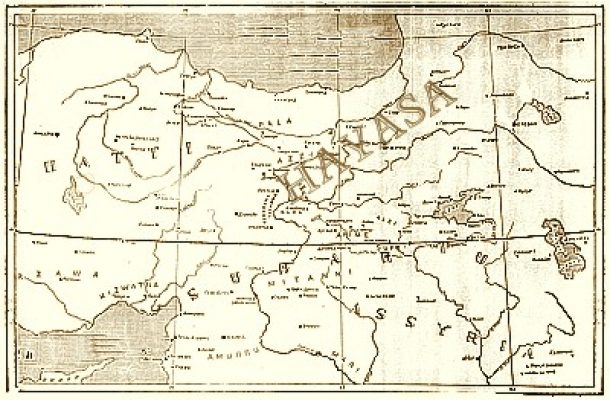 Hittite inscriptions deciphered by E. Forrer testify to the existence of a mountain country, the Hayasa, lying around the Lake of Van. Hayasa or Khayasa identified with Haik, Hayk or Hark, was inhabited before the coming of Armens. The suffix sa of Hayasa corresponds to the stan, derivative of Hayasatan (Armenia). Greeks knew about this country (Hayasa) and their writers wrote about Armenians or hayers. The cuneiform tablets of Boghaz Keuy have preserved the names of four succesive kings who ruled in Hayasa. They were Karannish, Mariyash, Hukkanash and Anniyash, the four covering a period of 55 years, from 1390 to 1335 B.C.

The first-named of this kings made incursions into the Hatti or Hittite empire, which were checked by the Emperor Dudhaliyash and hid successor, Subbiluliuma. Mariyash, the next king of Hayasa, who had married a Hittite princess, was punished with death because of his breach of matrimonial contract. Hukkanash, the third in the line, also married a Hittite princess, the sister of the Emperor Subbiluliuma.

The marriage treaty of this couple contained some interesting stipulations peculiar to the time. “My sister, whom I gave you in marriage,” says the Hatti rular, “ has sisters; through your marriage, they now become your relatives. Well, there is a law in the land of the Hatti. Do not approach sisters-in-law or your cousins; that is not permitted. In Hatti Land, whosoever commits such an act does not live; he dies. . . In your country, you do not hesitate to marry your own sister-in-law or cousin, because you are not civilized. Such an act cannot be permitted in Hatti.

Despite these restrictions imposed upon Hukkanash, he was no meek and submissive brother-in-law in political and military affairs. As a condition for the release of the thousands of Hittite prisoners held in his domain, he demanded first the return home of the Hayasan prisoners confined at Hatti. The Hittite Empire had been subject to contant harassment by its eastern neighbors, from the basin of the upper Euphrates to Aravanna (Erevan of today) and Tebruzzi (Tabriz). One of the most important of these enemies crouched on its eastern border was the kingdom of Hayasa-Azzi (the name Azzi represents the Alzi or Alzini of the Assyrian and Urartean inscriptions).

“Mursil, the Hittite Emperor,” say Cavaignac, speaking of that period, ” was busy in the wars waged against Azzi or Hayasa, which were as bitter as those waged against Arzava (Weatern Cilicia). About the beginning of Subbiluliuma’s reign, that country (Hayasa-Azzi) was subject to Hittite influence, but won its freedom later on. Annyash, the King of Hayasa, had sacked several districts and refused to release the prisoners taken. He had created a political uniom of the tribes of Armenia, and organized a kingdom which extended from the River Iris (Yerhil-Irmak) to the Lake of Van.”

Hayasa’s good fortune did not continue long, however. The Hittite Mursil II, having consulted the oracles, invaded Hayasa in 1340 B.C. In the following spring he crossed the Euphrates and reorganized his army at Ingalova-Angegh, Angl-which, about ten centuries later, was to become the treasure-house and burial-place of the captured fortresses lay on the west side of the Lake of Van.

The Annals of Mursil thus describe these campaigns:

Other enemies and people of Hayasa likewise. . . . They plundered Institina, blockaded Ganuvara. . . with troops and chariots. And because I had left Nuvanzas, the chief cupbearer, and all the heads of the camp and troops and chariots in the High Country, I wrote to Nuvanzas as follows; “See, the people of Hayasa. . . have devastated Institina, and blockaded the city of Ganuvara.” . . . And Nuvanza led troops and chariots for aid and marched to Ganuvara. . . And then he sent to me a messenger and wrote to me; “Will you not go to consult for me the augur and the foreteller? Could not a decision be made for me by the birds and the flesh of the expiatory victims?” “And I sent to Nuvanza this letter: ‘See, I consulted for you birds and flesh, and they commanded, Go! because these people of Hayasa, the God U, has already delivered to you; strike them!’ “And as I was returning from Astatan to Carchemish, the royal prince Nana-Lu came to meet me on the road and said, ‘The Hayasa enemy having besieged Ganuvara. Nuvanza marche against him and met him under the walls of Ganuvara. Ten thousand men and seven hundred chariots were drawn up in battle against him, and Nuvanza defeated them. There are many dead and many prisoners.’ ” “And when I arrived in Tiggaramma, the chief cup-bearer Nuvanza and all the noblemen came to meet me at Tiggaramma. I Should have marched to Hayasa still, but the chiefs said to me, ‘The season is now far advanced, Sire, Lord! Do not go to Hayasa.’ And I did not go to Hayasa. Hayasa as a fighting power was practically eliminated by the expedition of Mursil II in 1340 B.C. But after Mursil’s premature death in 1320 B.C. the Hatti empire suffered a series of shocks. His elder brother Arvandas (Erouand) had also died young. A natural phenomenon, the eclipse of the sun, had terrified the people. A dreadful epidemic of some sort took a vast number of lives, including that of the Queen. The population of the capital was decimated to such a degree as to require the forced immigration of new inhabitants from adjoining countries. Taking advantage of the ensuing debacle, Mursil’s nephew, Arma-u-as (Aramais?), contested against the heir-apparent for the succession to the crown. Still more serious was the menace of the sucession to the crown. Still more serious was the menace of the external enemies of the land, especially those of the North and East, who devastated the country in revenge for Mursil’s conquests. A record exists of the incursion of the Kaskas or Kaskians, who crossed the Halys River with 800 chariots and advanced as far as the capital, which they plundered.

The King was compelled to remove the idols and the paraphernalia for the worship of the dead to a safer place. The Kaskas-whose home was Armenia- attacked by way of Amasia. Leonard King describes them as an “unruly people” living between the Euphrates and the Lake of Van, and a constant menace to the Hatti. “No Hatti King,” says he, “was able to establish his power there permanently.” It may therefore be safely assumed that Hayasa still exerted its influence. In any case, however, the days of Hattite hegemony were numbered. The Assyrians forged ahead and gradually spread their domination over southern and western Armenia.