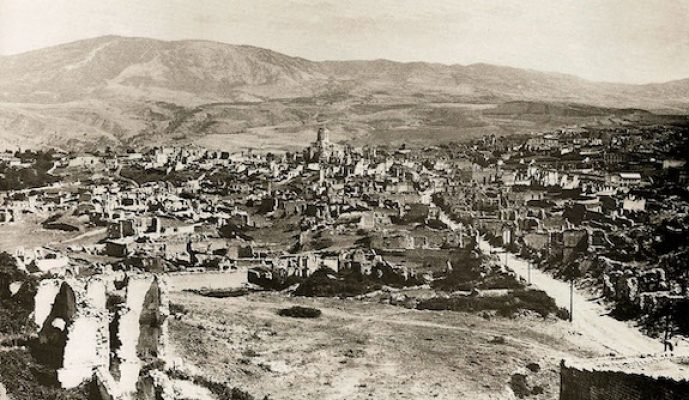 After collapse (Russia engaged in civil war) of Russian Empire on February 10, 1918 (Treaty of Brest-Litovsk) Turkey restarted its aggressive policy in Caucasus. At the beginning of April Transcaucasian Seim proclaimed independence of Transcaucasian Democratic Federative Republic, which existed only few months. Thus, Transcaucasus was seperated from Russia.

Turkish army used suitable moment, broke Erzrums’ ceasefire agreement (which had been signed between Russia and Turkey in December 1917) and attacked on a new established state. Turkish army occupied the Western Armenia and the major part of Eastern Armenia. At the end of May Armenian forces defeated the part of Turkish army the mission of which was occupation of Yerevan and remaining part of Eastern Armenia. On May 26, 1918 the Transcaucasus Seim promulgated about self-dissolution and each of the national factions in the Seim declared about the reinstitution of their national statehood. Unlike Armenia and Georgia, for the first time in the history the state of Azerbaijan (Tatars state) appeared in the political map of Transcaucasus which did not exist previously. The name for the Moslem population of East Transcaucasus was taken from the terminology of the Iranian state which had the respective region with its center Tebriz1.

As it is known an administrative territorial division in the Czarist Russia was carried out not according to the ethnic indication. Till the end of May 1918, i.e. before the dismissal of the Transcaucasian Seim, Nagorno-Karabakh was a part of the Yelizavetpol Gubernia.

In these circumstances the government of Azerbaijan declared the incorporation of Karabakh into the newly established Azerbaijani Democratic Republic of Baku and Yelizavetpol Gubernias. By this act Azerbaijan sought to consolidate its hold on Karabakh and Zangezur-the historical territories of Armenia with the Armenian population predominant.

The people of Karabakh and Zangezur rejected to recognize the jurisdiction of the Azerbaijani Republic. Here the two Armenian national uezd (district) Councils took the power into their hands, organized and headed the struggle against Azerbaijan.

On July 22, 1918 the First Congress of the Armenians of Karabakh was convened, which proclaimed Nagorno-Karabakh an independent administrative-political unit, elected the National Council as well as the People’s government made up from seven persons. On July 24, the Declaration of the People’s government of Karabakh was adopted which set forth the objectives of the newly established state power.

After this Congress the Azerbaijani government was trying to incorporate Nagorno-Karabakh into the Azerbaijani territory with the help of the Turkish troops. The commander of the troops, Nuri-Pasha, laid an ultimatum to the National Council of Karabakh, however, the second Congress of the Armenians of Karabakh, convened on September 6, rejected this demand of the Turkish commandment and the government of Azerbaijan.

On September 15, 1918, the Turkish troops entered Baku and the great massacres of the Armenian population of the city began the victims of which became 30 thousand Armenian. Hundreds of villages in Baku and Yelizavetpol gubernias were subjected to destruction and extermination. In these circumstances the command of the Turkish troops’ again laid an ultimatum to the Nagorno-Karabakh people’s government, demanding disarmament from Karabakh, the pass of the Turkish and Azerbaijani troops into Shushi and recognising the power of Azerbaijan.

To discuss the ultimatum the Third Congress of the Armenians was convened. On September 17,1918 where the draft of the answer to the Turks was adopted, in which the demands of disarmament and subordination to the power of Azerbaijan were decisively rejected. The Turkish command was compelled to refuse from the demand of the general disarmament of the people and agreed not to insist on recognising the power of Azerbaijan and preserve the status quo of Karabakh. The Turks only insisted on the necessity of bearing the troops into Shushi. Since the defeat of the German block in World War I was the question of some days, People’s government of Karabakh agreed on this demand to win the time. However the population of the district was discontented and couldn’t reconcile themselves to bringing the troops into Shushi.

Marching into Shushi without fighting the Turks disarmed the Armenian population of the town, arrested the representatives of intelligentsia. On this account the Armenians of Karabakh cancelled the decision of the Third Congress and began to prepare for resistance.

On October 31, 1918 Turkey admits its defeat in World War I. Its troops retreated from Transcaucasia and the English troops replaced them in December and became entire masters.

The government of Azerbaijan for this once tried to capture Nagorno-Karabakh with the help of the English. The new borders of Transcaucasia could not be defined without the agreement of England. Stating that the fate of the disputable territories must be solved at the Peace Conference in Paris, the English command in reality did everything for incorporating Nagorno-Karabakh into Azerbaijan long before the final resolution of the problem. Establishing a full control over the export of the Baku oil, the English sought the final secession of Transcaucasia from Russia; Azerbaijan, as it was supposed, was to play a role of an advanced post of the West in the South Caucasus to create barriers to the sovietization of the region.

On this account the policy of the allied powers in the relation with Transcaucasia had a pro-Azerbaijani trend. The solution of the Karabakhian problem was dragged out rather calculating on the development of the military-political situation that would be favourable for Azerbaijan, therefore the change of the ethnic structure of Nagorno-Karabakh.

On January 15, 1919 the Azerbaijani government with “the knowledge of the English command” appointed Khosrovebek Sultanov governor-general of Nagorno-Karabakh, simultaneously laying an ultimatum to the Karabakhian National Council to recognize the power of Azerbaijan.

On February 19, 1919 the 4th Congress of the Armenian population of Karabakh was convened in Shushi, which decisively rejected this ultimatum of Azerbaijan and expressed protest in connection with the appointment of Sultanov governor-general. The resolution adopted by the congress says, “Insisting on the principle of the self-determination of a people, the Armenian population of Karabakh respects the right of the neighbouring Turkish people for self-determination and together with this decisively protests against the attempts of the Azerbaijani government to eliminate this principle in the relation of Nagorno-Karabakh, which never will admit the power of Azerbaijan over it”.

In the connection with the appointment of Sultanov the British mission came out with an official notification, which stated, that “by the British command’s consent Dr. Khosrov Bek Sultanov is appointed provisional governor of Zangezur, Shushi, Jivanshir and Jebrail uesds. The British Mission finds it necessary to confirm that belonging of the mentioned districts to one or another unit must be solved at a Peace Conference”.

However in spite of the Karabakhi people’s protests the English commandment continued to assist and support the Azerbaijani Government in realizing the policy of incorporation of Armenian Karabakh into Azerbaijan. The English troops’ commander in Baku Colonel Schatelwort stated to the Karabakhian people:”Your roads are closed, your starving people will not get bread, we will not help you, until you recognize the power of the Musavat Azerbaijan. Unable to force Nagorno-Karabakh to it knees by threats or by the help of the armed forces Schatelwort personally arrived at Shushi late in April 1919 to compel the National Council of Karabakh to recognize the power of Azerbaijan. On April 23, in Shushi the Fifth Congress was convened which rejected the Schatelwort’s demands.

On those days there was concluded the agreement to convene the Sixth Congress of the Karbakhs’  Armenians, at which the representatives of the English Mission and Azerbaijani government were to take part. The main objective of the Congress was the discussion of the interrelations of Nagorno-Karabakh and Azerbaijan before the convention of the Peace Conference in Paris. However the representatives of the English mission and the government of Azerbaijan arrived at the Congress, after it had finished its work and the negotiations did not take place. To find out whether Nagorno-Karabgh would be able to defend its independence in case of war, at the Congress the Commission was established which came to the conclusion, that the Karabakhians would not be able to do so. In such circumstances the Congress, being under the threat of the armed assault form Azerbaijan, was compelled to start negotiations.

Eager to win time and to concentrate the forces available, the Congress of the Armenians of Karabakh convened on August 13, 1919 concluded the agreement on August 22 according to which Nagorno-Karabgh considered itself to be provisionally within the borders of the Azerbaijani Republic till the final solution of the problem at Peace Conference in Paris. However the Armenians did not lay down their arms and the Azerbaijani troops did not enter Nagorno-Karabakh. The 22nd August Agreement in essence did not change the status of Nagorno-Karabakh – the land still remained an independent political entity.

This circumstance could not satisfy Sultanov who was preparing for the final incorporation of the territory into Azerbaijan by changing the ethnic structure of Nagorno-Karabakh. On February 19, 1920 Sultanov turned to the National Council of the Karabakhs’ Armenians with the demand “urgently to solve the question of the final incorporation of Karabakh into Azerbaijan”.

From February 23 till March 4, 1920 there was held the Eighth Congress of Karabakhs’ Armenians which rejected the demand of Sultanov. The resolution of the Congress criticized the policy of the government of Azerbaijan, which roughly violated the terms of the 22nd August provisional agreement. In accordance with the decision of the Congress the diplomatic and the military representatives of the allied states of the Entente, three Transcaucasian republics and the provisional governor-general were informed that “the repetition of the events will compel the Armenians of Nagorno- Karabakh to turn to the appropriate means for defense.”

However, the government of Azerbaijan did not intend to stop. It decided hastily to conquer Nagorno-Karabakh and azerbaijanized it

Proceeding from this being the circumstances, the Karabakhs’ Armenians decided to prepare for defense. On the night from March 22-23 they rose in an armed revolt in Nagorno-Karabakh.

Heavy fighting continued from March 22 till April 13. March 23, 1920 became a particularly tragic day, when Turkish-Azerbaijani troops burned and robbed Shushi, the capital of the district, at that time the fifth town in Transcaucasia in number of residents. On that day about 20 thousand Armenians perished and the town was practically razed to the ground. In the course of the war tens of churches and other monuments of History and Culture were destroyed and profaned.

Soon the military units arrived from Armenia to help: Nagorno-Karabakh was entirely liberated. On April 1920, the Ninth Congress of the Karabakhi Armenians was held which proclaimed Nagorno-Karabakh an essential part of Armenia. The concluding document reads:

1. “To consider the agreement, which was concluded with the government of Azerbaijan on behalf of the Seventh Congress of Karabakh, violated by the latter, in view of the organized attack of the Azerbaijani troops on the civilian Armenian population in Shushi and villages.

2. To proclaim the joining of Nagorno-Karabakh to Armenia as an essential part of Armenia”.