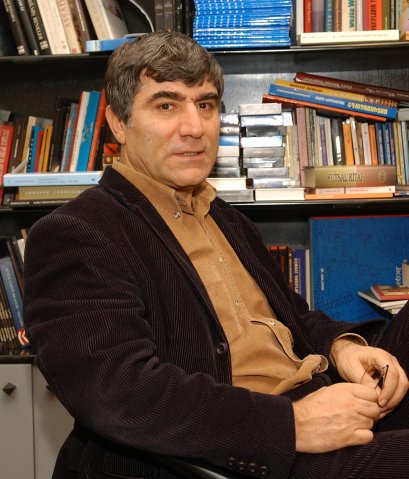 Hrant Dink was a Turkish-Armenian intellectual, editor-in-chief of Agos, journalist and columnist.

At the age of seven, he migrated to Istanbul (Kpols) together with his family. After divorced of his parents Hrant Dink was taken to Armenian Orphanage in Gedikpasa where  he was raised by the  Istanbul with his 2 siblings.

He got his primary and secondary education in Armenian schools. Immediately after secondary school, he got married to Rakel, a childhood friend from the orphanage. Hrant finished the Istanbul University’s Science Faculty with a degree in zoology. Hrant served 8 months with the Turkish Naval Infantry Regiment in Denizli to satisfy his mandatory military service. He had three children with his wife.

He started to publish the Turkish-Armenian weekly newspaper AGOS on April 5, 1996 to establish a bridge of communication and understanding between the larger Turkish population and the Turkish-Armenian community which he complained was living too isolated an existence. He tried to make AGOS newspaper a democrat and oppositional voice of Turkey and also to share the injustices done to Armenian community with public opinion.

He was charged and convicted of insulting Turkishness in Turkey, charges which he denied.

After his high profile trial, he was targeted by Turkish nationalists and murdered by gunshot to the head as he left his office. His son Arat now runs Agos and is now on trial for insulting Turkishness.

Dink was best known for his role as editor of ‘Agos’ Turkish and Armenian Language weekly in Istanbul. He worked as the columnist and editor-in chief of AGOS weekly newspaper, which can be regarded as the voice of Armenian community, from 1996 until January 19, 2007 when he was shot dead outside of his office.