Kars – History of the Armenian City 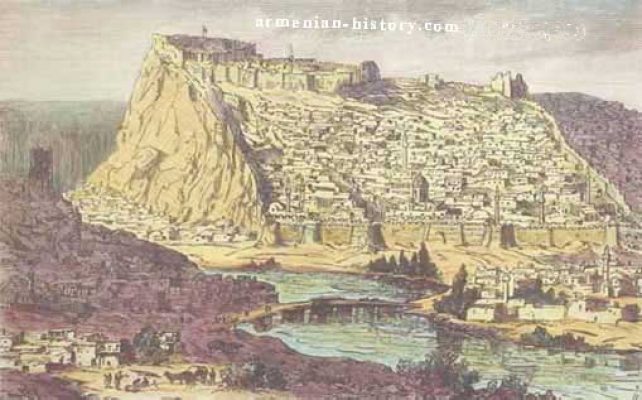 The city of Kars is located about 50km to the north-west of the ruins of Ani. As a settlement, Kars is probably older than Ani and, unlike Ani, Kars was never abandoned.

From the ninth century, the Fortress City of Kars served as the seat of the bother of the ruling king of the Bagratid Armenia. Abas Bagratid (Bagratuni) was probably the master of Kars, even before his coronation in 929, when his brother Asot II (914-929) was king. Armenian Bagratid king Abas I transferred the capital to Kars as soon as he became king and for a short time (928-961) Kars was the capital of the Armenian Bagratid kingdom.

Shortly after the Bagratid capital was transferred to Ani, Kars became (in 963) a separate independent kingdom known as Vanand – the Armenian name for the Kars region. This kingdom was to outlive that of Ani.

After the Seljuk Turks captured Ani, the last Armenian king of Kars ceded his city to the Byzantine empire in 1064, getting in return the city of Amasya and lands in northern Cilicia. The Byzantines were no more successful in defending Kars than they were with Ani, and soon lost it to the Turks (in 1071). The Turkish population of Kars would have been small – but support from the Emirs of Erzurum maintained their power until 1206, when the Georgians and Armenians expelled the Turkish rulers. In 1236 the Mongols occupied the region. As with other places, they probably gave a great deal of autonomy to the majority Armenian population: an Armenian prince is known to have been governing Kars in 1284.

After the collapse of the Mongol empire a series of petty Turkish emirs governed Kars until its incorporation into the Ottoman Turkish empire in 1534. In 1579 the Ottomans undertook an extensive rebuilding of the city and its fortifications to guard against Persian attacks. From the mid 18th to the early 19th century control from Constantinople had diminished to the extent that the pashas of Kars were semi-autonomous.

The gradual Russian conquest of the Caucasus, starting in the 18th century, led to an influx of Muslim migrants, especially Circassians. Kars became a strategic and heavily fortified border town protecting the Turkish empire’s eastern frontier and the road to Erzurum. The Armenian population by then was probably quite small and seems to have been lived mainly in a district to the west of the old castle, just outside the city walls – there are still two ruined Armenian churches here, as well as an old medieval Armenian graveyard. The Russians occupied Kars in 1828, in 1855 (after celebrated siege lasting seven months) and again in 1877. This time the Russians kept the city.

A substantial part of the Muslim population left after 1877, choosing not to live under Russian rule. Those Muslims still in Kars seem to have moved to the districts formerly lived in by the Armenians. The Armenians gradually moved into an entirely new district of European-style buildings built on a grid plan to the south of the old medieval city, and most of the old city walls were demolished. There was a large influx of Armenians from other parts of Russian controlled Armenia, as well as Armenians fleeing the oppression and massacres of the Ottoman empire: Kars became a rapidly growing boom town.

By the end of the 19th century the Kars plain had become the home to various sects, mostly Protestant Christian, that were unwelcome in Russia proper. A few surviving adherents of one group called the Molokans are still supposed to be living in and around Kars. Some of the descendants of German and Estonian settlers still live in the Kars region, and there were also many Greek settlers, now all gone. The policy of allowing non-Armenians to settle here was a deliberate Russian one to limit the growth and wealth of the Armenian population. Lynch mentions that around Yerevan uncultivated lands were for the most part in the hands of the Russian government who were not inclined to sell or lease them to Armenians because they were keeping them for Russians.

The recapture of Kars was a key military objective for Turkey during the early months of the First World War, but their invading army was heavily defeated at the battle of Sarikamish.

After many more battles, Russian forces succeeded in advancing as far west as Erzincan, but the collapse of the Russian army after the 1917 revolution left only thinly spread Armenian units to resist the inevitable Turkish counter-attack. By 1918 the Turkish army was cutting a swathe of destruction across the newly declared Republic of Armenia, capturing Kars in April 1918 and reaching Baku on the Caspian sea. Defeat on other fronts caused Turkey to surrender and withdraw to the pre-war borders.

In 1919, Armenian troops liberated Kars Province which became under the full administration of the First Republic of Armenia.

On 30 October 1920 the city was taken with little resistance by Turkish forces.

In 1921 Bolsheviks and Turks signed the “Treaty of Kars” ceding the towns of Kars, Sarikamish, Igdir, Kagizman, Ardahan, Artvin and Oltu to Turkey.

In 1920 much of the town’s Armenian population had fled in panic before the advancing Turks. Of those that stayed, hundreds were imprisoned – and then either executed or sent to Erzurum to work as slave labor building roads. Those Armenians still free had little incentive to remain.

The Kars Treaty enabled the deportation of the remaining Armenians. A traveller named Reitlinger visited Kars in 1931 and found most of the city deserted and in ruins, with a civilian population numbering only a few hundred. By the late 1960s the population had increased to 25,000. Today the Turkish census says that there are 74,000 inhabitants in Kars, which is now the capital of Kars province.