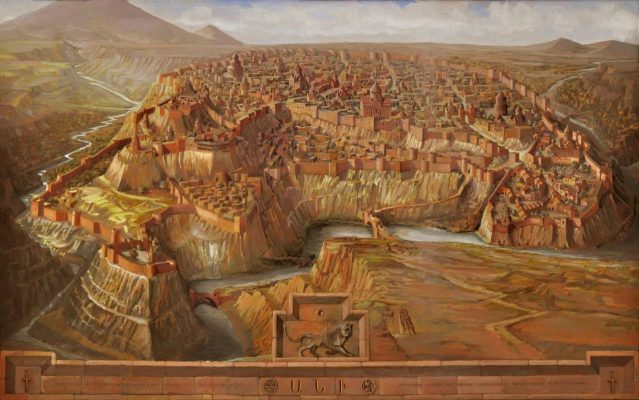 Ani “city of 1001 churches” The Capital of Bagratid Armenian Kingdom

Ani (the city of 1001 churches) is one of the most loved and famous capitals of Armenia. The city was located on a hilltop  near the bank of the Akhuryan (Ախուրյան) River. The territory of the city had been inhabited from the ancient times.

Bronze and Iron age settlements have been excavated on the site. There is re-used classical masonry in the citadel walls and the remains of what is probably a Zoroastrian fire temple.

The fortress of Ani  was first mentioned by Armenian historians in the 5th century A.D. It was  a part of Kamasarakan principality. By the end of the 8th century Ani with its nearby estates got under the control of Bagratid dynasty. The city began growing since 961 A.D, when the Bagratid king Ashot III transferred his capital from Kars to Ani. During the period of only  40-50 years Ani transferred from a little fortress town to a big medieval city. King Ashot constructed new city walls known as Inner (or Ashotyan) walls . The city grew so quickly that the construction of much larger outer (or Smbatyan) walls  was completed by the year 989. The ruins that still extend beyond these walls prove the fact of not enclosing a large enough area to contain the whole population of the city.

Ani became an important crossroad for merchant caravans. The city controlled trade routes between Byzantium, Persia, Syria, Caucasus,  and central Asia.  In 992 the Armenian Katholikosat moved its seat to Ani: at the start of the 11th century there were already 12 bishops, 40 monks and 500 priests in the city.

After King Gagik I-st death (in 1020)  his two sons (Hovhannes-Smbat and Ashot) began a fight  for the Armenian throne. Byzantine Empire, which have already got the control of Taron principality (966), Tayq (1000)  and Vaspurakan kingdoms (1016),  tried as well to occupy Ani-Shirak’s Bagratid kingdom

King Hovhannes-Smbat died in 1042, after what the Byzantine emperor Michael IV claimed sovereignty over Bagratid Armenian Kingdom. As Hovhannes left no generation after his death people of Ani put forward the son of Ashot, Gagik II, as his successor. The Byzantine army, which had been sent to capture Ani was defeated in 1042. Later Byzantine Emperors tried several times to occupy Armenian Captial, but didn’t succeed. In 1045 the city’s population, realizing that they were leaderless and surrounded by enemies, decided to surrender Ani to the Byzantines.

In 1064  Alp-Arslan Sultan of Seljuk-Turks  with his big army attacked Ani. Seljuk-Turks captured and devastated  the city.

In 1072 the Turks sold Ani to Abl-Svar who was Dvin’s Emir. And who in its turn gave Ani to Manuchyan Emirs.  In 1199 Zaqaryan (Zakharyan) princes liberated Ani and other Armenian territories and established their principality. Under their rule Ani regained much of its former prosperity.

In 1237 Mongols invaded and occupied Armenia. Later Ani was occupied by Kara Koyunlu.

In 1380s  Tamerlane (Lenk-Termur) captured Ani, but on his death the Kara Koyunlu regained control.

In 1579 Ani became a part of the Ottoman Empire. A small Armenian village still remained within its walls at least until the mid 17th century. Some European travellers in the early 17th century mentioned in their works about the existence of 200 churches in Ani and its the immediate neighbourhood. By the beginning of the 19th century Ani was empty of human beings. It became ” The city of ghosts”.

Ani’s structure was similar to other  medieval big cities’ structure. It consisted of a citadel, an inner city (or shahastan) and suburbs. The citadel was located on the South-West of the city and separated from shahastan by special city walls. Tho royal palace, several churches, royal bath-house and other buildings were located in the citadel.

The Inner city was located on the spacious upland which also had defence walls.

Ani had a spacious district  known as “Underground Ani” (Ստորգետնյա Անի), which consisted of hundreds of caves.

There were many churches in Ani. According to tradition the number of churches In the city and its nearby territories  was 1001.

The queen among the Churches of Ani was Mother church, also known as Surp Asdvadzadzin (church of the Holy Mother of God). Its construction was started  under the rule of Smbat 2-nd in the year 989 and finished  in the times of Gagiik 1-st in the year 1001. Mother church’s  architecture was Trdat.

Another famous church was Araqeloc church which was built in 1004.

The oldest church of Ani was the “Church of the palace”, which had been built in VII century A.D.

In the year 1010  under the rule of king Gagik I was  finished  St. Grigor (or Gagkashen) church. The designer of the church was the architect Trdat. The church collapsed in a relatively short time after its construction. Later some houses were constructed on the top of its ruins.

One of the famous churches of the medieval Armenian Capital was Grigor Lusavorich church. This church, finished in 1215, is the best-preserved monument at Ani. It was built during the rule of the Zaqarians and was commissioned by a wealthy Armenian merchant named Tigran Honents. Its plan is of a type called a domed hall. In front of its entrance are the ruins of a narthex and a small chapel that are from a slightly later period.

The most Important building of Ani was royal palace. Located in citadel, it had been built during the period of Bagratid kingdom. In 1908 and 1909 Nikolai Marr excavated the citadel hill. He uncovered the extensive ruins of the palace of the Bagratid kings that occupied the highest part of the hill. Also inside the citadel are the visible ruins of three churches and several unidentified buildings.

Ani had 2 lines of defense walls. The First line of defensive walls had been built during 963-964, under the rule of  king Ashot 3-rd (Ashotashen walls).

Second line of the city walls had been built by king Smbat (977-989)  (Smbatyan walls). Smbatyan walls had 2,5 kilometrs long and 8-10 meters height  The northern walls had three gateways, known as the Lion Gate, the Kars Gate, and the Dvin Gate.

Ani had many bridges which had been built during X-XI centuries.