Ghazar Parpetsi (Ղազար Փարպեցի)  was an Armenian historian who lived in Armenia during the 5th century AD. He was born in the village of Parpi in Armenia. Owing to the close ties he held with the Mamikonian family, following the defeat of the Armenians at the battle of Avarayr in 451, Ghazar moved to the Mamikonian Prince Ashusah’s castle in Tsurtav (in Georgia), where he received his primary education.

Studying under the auspices of Aghan Artstruni, he befriended Vahan Mamikonian; he was an excellent student and from 465 to 470 he attended school in Constantinople, learning new languages, studying religion, literature, and classical philosophy. Returning to Armenia, Ghazar busied himself with educational and spiritual activities in the town of Shirak, then part of the domains of the Kamsarakan family. From 484 to 486, he lived in Syunik until Vahan Mamikonian, who had been recently appointed the head of marzpan Armenia, invited him to oversee the reconstruction of a monastery being built in Vagharshapat. Vahan appointed Ghazar an abbot at the monastery, although the education that Ghazar had received as well as his educational and spiritual policies did not sit well with the more conservative elements of the church. Accusing him of heresy, he was forced out of the monastery in 490, taking up residence in the city of Amida in Byzantium.

According to Armenian tradition, it is said that Ghazar was buried near the ruins of an Armenian church in Parpi Canyon, south of a village named Lazrev in Armenia. 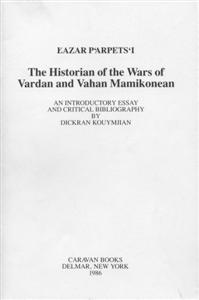 Ghazar is best known for writing the History of Armenia. After returning from Amida in 493, Vahan Mamikonian asked his friend to write a new history of Armenia, starting from where historian Faustus of Byzantium (Pavstos Byuzand) left off; that is, with the reign of king Arshak II.History is composed of three parts: the first is about Armenian history from the mid-fourth century and life in Armenia under Sasanian rule until the deaths of Sahak Partev and Mesrop Mashtots in the mid-fifth century; the second concerns the events leading up to the battle of Avarayr as well as its subsequent consequences; and the third follows up on the Vartanank wars and the 484 signing of the Nvarsak Treaty. The main sources he uses in History are the primary works of other historians, Agathangelos, Koryun, and Faustus, although he apparently made use of other historians’ works, including Eusebius of Caesarea’s Historia Ecclesiastica.