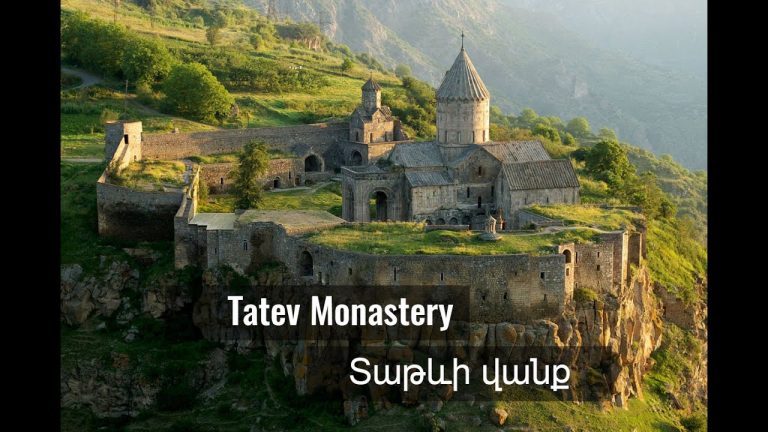 The Tatev Monastery (Տաթևի վանք) is a 9th-century Armenian Apostolic monastery located near the Tatev village in Syunik Province, Armenia.

Short Video about the Tatev Monastery

There was a pagan temple on the place of Tatev Monastery. The temple was replaced with a modest church following the Christianization of Armenia in the 4th century.

Development of the Tatev Monastery began in the 9th century when it became the seat of the bishop of Syunik.

In the beginning of the 11th century, Tatev hosted around 1,000 monks and a large number of artisans.

In 1044, armed forces of neighbouring emirates destroyed the St. Gregory Church and its surrounding buildings, which were reconstructed soon after that. In 1087, the church of St. Mary was built to the north of the complex.

The monastery suffered significant damage during Seljuk invasions in the 12th century and the earthquake in 1136. In 1170, Seljuk Turks plundered the Monastery and burnt some 10,000 manuscripts. The Monastery was rebuilt through the efforts of Bishop Stepanos near the end of the 13th century.

Tatev Monastery During the 13th-14th centuries

The Monastery was granted an exemption from taxes during Mongol rule. It regained its economic strength with the assistance of the Orbelian family.

During Timur lane’s campaigns into Syunik (1381–1387), Tatev was looted, burnt, and dispossessed of a significant portion of its territories. The Monastery received an additional blow during Shah Rukh’s invasion in 1434.

The monastery was reborn in the 17th and 18th centuries; its structures restored and new ones were added. It was looted again during the incursions of Persian forces led by Aga Mahmet Khan in 1796.

In 1836, Czarist Russia put an end to the metropolitan authorities of Tatev through the imposition of Pologenia, and Syunik became part of the Diocese of Yerevan.

Buildings of the monastery

The fortified Tatev monastery consists of three churches -Saints Paul and Peter, Saint Gregory the Illuminator, and Holy Mother of God-, a library, refectory, bell tower, mausoleum, as well as other administrative and auxiliary buildings.