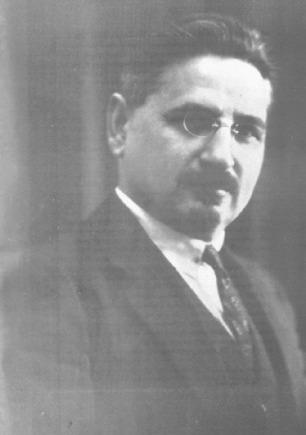 Simon Vratsian (Great Sala, nr Nor Nakhichevan, 1882 – Beirut 1969) Attended local Russian and Armenian schools, then the prelacy school of Nor Nakhichevan. Joined the Dashnak party in 1898, mistakenly believing — by going through the wrong door — that he was joining the Hunchaks. At the Gevorgian seminary, Echmiadzin, 1900-1906. Returned to Nor Nakhichevan as Dashnak party worker. Took part in the 4th general congress of Dashnaktsutiun, Vienna, 1907, supporting the party’s adoption of socialism. To St Petersburg in 1908 to study law and education. To Moscow, where a collection of literary pieces, Psak (‘Crown’) was published in 1910. To Constantinople in the same year, taking refuge from the anti-Dashnak measures of the tsarist authorities. On to Erzerum, where he edited Harach and taught at the Sanasarian academy. To the USA in 1911; edited Hairenik (Boston). To Erzerum for the 8th general congress of Dashnaktsutiun, July 1914; elected to the party’s Bureau. Discussed policy with the Young Turk leaders. Briefly jailed as a Russian spy, August 1914. Escaped to Transcaucasia, where he became an organizer of the Armenian volunteer units. Often visited the front. After the disbandment of the units in late 1915, he serve as a common soldier in Tiflis. Appointed editor of Horizon (Tiflis) after the March 1917 revolution. Attended the Moscow state conference, July 1917. A leading figure at the Armenian National Congress, September 1917, he was elected a member of the National Council. In southern Russia throughout the summer of 1918, gaining support of the volunteer army, obtaining as a result 3,000,000 cartridges, some machine-guns, and grain. Returning to Transcaucasia in October 1918, he was instrumental in gaining Populist support for the government coalition. Asked by H.Kachaznuni to accompany him on his tour of Europe and America in the spring of 1919, he was refused a visa by the British authorities in Tiflis, on the grounds of his being a radical socialist. Edited Harach (Yerevan) on his return. Elected to the Parliament; helped organize the 9th general congress of Dashnaktsutiun, Yerevan, autumn 1919. Re-elected to the party Bureau. Accepted ministry of labour, agriculture and state property in Khatisian’s Cabinet. Held the same ministry in the Bureau government of H. Ohandjanian; additional responsibilities for information and propaganda. After the resignation of the Bureau government, and the failure of Kachaznuni to form a coalition, Simon Vratsian accepted post of prime minister, 24 November 1920. Agreed on hand-over of power to Bolsheviks, 2 December; his government also agreed to the signing of the treaty of Alexandropol. In hiding a few weeks after Sovietisation. President of the Committee for the Salvation of the Fatherland after the 18 February 1921 rebellion.

Appealed to Europe for assistance against the Bolsheviks; finally to Kemalist Turkey too. To Tabriz in July 1921. On to Tehran, Bombay, Alexandria and Constantinople. In Vienna, Geneva and Paris, 1923-1925. Edited Droshak (Paris, Monthly) 1927-1933. Wrote Hayastani Hanrapetutiun (Paris, 1928, rev. edn, Beirut, 1958). To South America in 1936; back to Paris, then to North America in 1939. In 1945 he presented a petition to the UN General Assembly at San Francisco demanding the retrocession of provinces held by Turkey to Armenia. In 1951. on the death of Levon Shant, he was appointed principal of the Djemaran (the Nshan Palandjian College), Beirut. Expressed a wish to visit Soviet Armenia at the end of his life, but circumstances prevented it. Simon Vratsian Died in May 1969.